Once the sad news of the cancellation of Summerfest was announced, a group of neighbors and friends who have enjoyed years of attending Summerfest together, decided the festival was going to happen on their own terms and conditions. Six Pebble Valley backyards, a neighborhood in Waukesha county, became the new setting for the DIY version of Summerfest this year, with unique decorations and signage to keep the Summerfest theme alive.

Summerfest in the Neighborhood Lineup

The entry fee for DIY Summerfest was a canned food item to keep the food drive tradition alive. As any other year of Summerfest, this version also had a lineup of activities to let event-goers in the know of what was happening on each stage. From there, it was up to the neighbors to claim their own piece of Summerfest and make it unique to the family, and the renaming was on key. No No’s Martini Lounge took over Jo Jo’s martini Lounge this year, Harley Redmondson “Rickshouse” substituted for Harley Davidson’s Roadhouse, Laurelkugel’s Danny Lodge took the spot of Lienenkugel’s Shandy Lounge, and the Desai International Stage hosted a lovely band to keep the music playing throughout the day, as any day of Summerfest typically would.

The fun didn’t stop with the decorations. Activities included a hole in one game that went from one street into the large yard across the street, Zumba, an interactive cardio dance was taught by a neighbor, and the neighbors even made a Leienkugel canoe to sign and keep as a memoir of the DIY at home Summerfest.

Although Summerfest could not happen this year, these neighbors made the most of it, turning the sad news into an opportunity to make the event more personal. “We were sad when we heard Summerfest was cancelled this year but then we realized aside from the food and the bands, the event is really about being with the people we love, that’s when the neighbors and I came together with a plan to have the event here in our backyards,” says Lisa Goodings, a neighbor who helped put on ‘Summerfest in the Neighborhood’.

Thanks to these creative neighbors, Summerfest was able to continue this year with a more important meaning than ever; togetherness in the community. 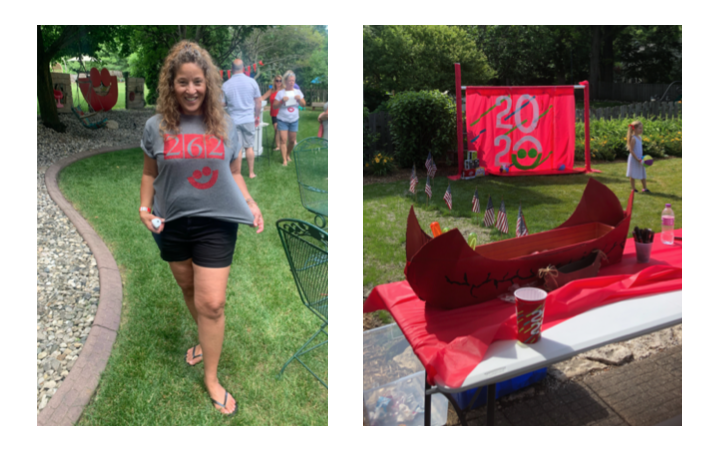 Disclaimer: Every guest attending the neighborhood Summerfest had their temperature taken prior to entering. Masks were also available for anyone who wanted one.

Share Your
Milwaukee Story
10 Ways You can Support Local Milwaukee Businesses Right Now
Milwaukee, a city that thrives on the support of the community needs your support now than ever. It is no secret that Covid-19 has played a large role in how businesses have had to make ends meet in new ways. See how you can help your favorite local restaurants and businesses open during these unprecedented times.
Continue Reading
2020 Milwaukee-Area Farmer’s Markets That are Open Now
Continue Reading
The Ultimate Milwaukee Scavenger Hunt (To Complete from Home)
While staying at home is necessary, it can also become exhausting when you live in the amazing city of Milwaukee with endless adventure. We want you to be safe and practice social distancing, that’s why we created a scavenger hunt you can complete from the comfort of your own home. Have fun with the family, or play with your friends on your next video chat!
Continue Reading